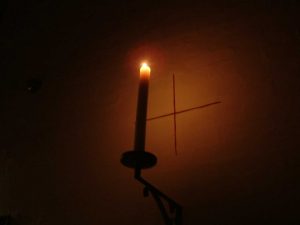 Around the church we see the marks of the Cross etched into the walls, and with candle-sconces under them. These crosses mark the places where the walls were anointed with Sacred Chrism on 3rd September 2004, when the church was consecrated by Bishop Leo McCartie. The candles were then lit for the first time, and are re-lit on the anniversary of the consecration each year. The two sconces in the sanctuary were installed at the building of the church, the other ten were made by a teacher at Thomas Becket School for the consecration, re-cycling the iron which formerly were light fittings in the church.